The death of Achilles was not mentioned in Homer's Iliad, but appeared in later Greek and Roman poetry and drama concerning events after the Iliad, such as later in the Trojan War. Here and in the myths surrounding the war, Achilles died from a heel wound as the result of an arrow—possibly poisoned—shot by Paris.

According to a myth, Achilles' mother dipped the infant Achilles in the river Styx, holding onto him by his heel, thus he became invulnerable where the waters touched him -- that is, everywhere but the areas covered by her thumb and forefinger.

This is a statue of Achilles dying at the Corfu Achilleion. (www.wikipedia.com) 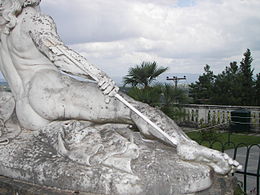 The achilles tendon is one of the largest and strongest tendons in the body.  The gastrocnemius, soleus and plantaris muscles all combine to form this structure which inserts onto the back of the heel bone (calcaneous), see image below.  The achilles tendon and its' muscles cross three joints, the knee, ankle, and subtalar joint.  Uniquely, it has no tendon sheath like other tendons.  Supposedly the achilles tendon has poor blood supply 2-6 cm above its' insertion point making it vulnerable to rupture, degeneration and other variations of mechanical failure, however, this is a much debated point.  Some studies have shown that the vascular supply is quite good in this region, the fact remains that this is the location of most achilles tendon ruptures/tears/degeneration.  Other very common problems usually include calcification of the tendon at it's insertion into the calcaneous creating spurs and loose bony bodies.  Often a large spur can develop near the insertion of the achilles that can place painful forces against the tendon itself (Haglund's Deformity). Muscles, tendons and ligaments weaken, shorten and become ineffectual structures if exercise and activity are forgotten.  The office person with feet shoved under a desk for 8 hours a day with toes down and achilles tendon slowly shortening who then runs out on the weekend to do some high impact activity is a prime candidate for achilles problems.  People who use cowboy boots, high heels or other shoes with a higher heel also may suffer the same fate if they transition rapidly to shoes without a heel.  If the achilles is repeatedly injured and left untreated, the chronic inflammatory process may eventually result in degeneration of the tendon, calcification and pain only repairable with surgery.   Stretching for 30 minutes a day and warm ups before exercising are both great preventative medicine.    Take your time warming up for an event, don't rush things.   A large review of studies recently demonstrated that stretching and warm up exercises did help prevent injury but the evidence was not overwhelming. Achilles tendinitis presents as chronic pain that worsens with activity and is relieved with rest.

For ruptures and tears, the normal story usually involves the patient relating an audible pop, feelings of being hit with a baseball bat in the heel, a fall from significant height, and any variation of "weekend warrior" stories.  Like any tissue of the body, "if not used, it becomes easily abused".

Imaging such as an MRI (performed in a Hospital) or Ultrasound (performed in our office) can shed light on the seriousness of the injury, helping to differentiate between tears, ruptures and chronic tendinitis.

Often the patients story helps in the diagnosis.  Was there an acute event such as a fall and a popping sound or has the pain been gradually worsening over the last few months?  A recent event that was the beginning of the pain indicates rupture or tear whereas chronic soreness would indicate more of an ongoing tendinitis (inflammation of the tendon) or tendinosis (degeneration of the tendon).  Imaging is normally a good idea because one type of problem often masquerades as another muddled by the fact that as patients, we don't often remember specific details months after a problem began.

For the problems of tendinitis and tendinosis the usual suspects are called upon: rest, ice, NSAIDS (see post: Do I Have Plantar Fasciitis?).  The achilles tendon absorbs enormous amounts of  of tensions and energy when walking and running, this means that taking the tension off the tendon while it heals is paramount.  Often a podiatrist will prescribe cessation of running and walking for a number of weeks or at least cutting down the amount significantly.  The foot in question will be placed in a ski boot looking device (CAM walker) for bad cases.  For less severe cases, to protect the achilles tendon from its normal motions we will often incorporate a heel lift to take more tension off the tendon.  These boots, called CAM walkers, can be removed so the pt can follow a protocol of simple stretches and range of motion exercises as their healing progresses.

Depending on the seriousness of the injury , within 3-4 or more weeks the pt should begin eccentric exercises.  A concentric exercise would be curling a dumbbell.  Eccentric exercises are just the opposite of shortening muscles, it's allowing the muscle to lengthen slowly while resisting the movement.  It is unclear why this is so important, but studies have been very clear that this is a necessary and effective way of treating tendinitis and similar injuries.

Massage is a great way to loosen up the tendon and relieve pain, the video below mentions rollers as an easy way to accomplish this.

Here is a fantastic video Dr. Metzl has put together explaining the in's and out's of achilles tendinitis.   (http://www.runnersworld.com/injury-prevention-recovery/inside-doctors-office-keep-achilles-tendinitis-away?cm_mmc=NL-TrainingExtra-_-1174884-_-01222013-_-Inside-the-Doctor%27s-Office%3A-Achilles-Tendinitis)

Grastym/Astym, Topaz Microdebridement, Shockwave Therapy and Tenex have all had success with treating tendinitis/tendinosis pain and encouraging healing (see post: I Think I Have Plantar Fasciitis).

Partial and complete tears are a little more tricky.  Obviously the ends of the torn ligaments need to be brought back together or at least held together to allow for them to heal.  This either means surgically suturing the pieces together with possible reinforcement coming from cadaver (donated) tissues or synthetic tissues, or serial casting/CAM Boot therapy allowing the ligaments to be brought back together by the body's own natural healing processes.

If you want to begin a battle, state boldly on the internet that one (surgery or casting) is superior than another.  The evidence shows that within the first year of surgical intervention there are lower rates of rerupture but not in the long term.  Surgical correction was shown to have more complications such as infection.  The casting/conservative approach had more reruptures in the first year but fewer complications.  Both were quite similar in outcomes after a year or more of recovery.  I'm not going to take sides here as treatment protocols are completely specific to a patients situation, but something tells me that surgery may be the better option for a "younger" healthy patient who can keep the wound clean post op.

Achilles tendon calcification/spurring normally requires surgical resection of the offending portion of the tendon with reattachment of the remaining tendon to the calcaneous.  The amount of rehab time depends on how invasive the surgery had to be to remove the spur/calcifications.

In general, you are looking at wearing a cast/boot for 6-8 weeks or so with a gradual return to activities.  Physical therapy is usually prescribed for strengthening and stretching guidance.  Full sporting involvement should be delayed for 6 months after the surgery or from the beginning of casting protocols.  This of course depends on the patient, the severity of the tear and so on.

So if the weekend calls with some court, trail, floor or wall with your name on it, take your time warming up, if it's been a long while, take it easy, you'll be happier without six months of rehab.   :)

This is an evolving area of surgery and medicine with many new products and procedures being attempted at this time.  Before committing to surgery or some other treatment program make sure you do your own reading or get a second opinion if you have any  doubts at all.

Feel free to send any questions our way.

Proudly providing foot and ankle care for professional, college, highschool and beginner athletes for over 40 years.

Introduction Video to our Clinic: